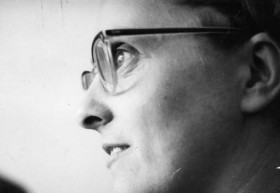 Born on December 05, 1931 in Reggio Emilia, before two sons (Sister Angela was born on January 1, 1938) she joined the Congregation of the “Daughters of the Holy Heart of Jesus” in Modena, a congregation of diocesan law of which she will be a part for 12 years until 1964. During his time in the congregation he devoted himself to the teaching of religion in Modena.

In 1964 he met Father Anastasio Gutiérrez, a Claretian priest, professor of Canon Law at the Pontifica Lateran University and with him began to dream of the realization of a new reality within the Church.

Paola with intuition and charisma together with Father Gutiérrez who had the legal means, create a symbiosis and a complementarity strongly fruitful in the post-conciliatory Church. What united them? The desire that “Christ was everything in all”, the renewal and simplification of life in the Church, the getting that every person can express himself with his potential, with the freedom of the “Children of God”, the tending to communion and family life as place to be themselves in evangelical testimony.

This is how after countless comparisons and reflections on 19 March 1965 the “Lay Group Follow Me” was born, approved as “Pia Union” by S. E. Mons. Abel Rabbits, Bishop of Sansepolcro/Teramo.

Since then he has always led the Group even though he became Its President only in 1990.

Let us recall some of his exhortations:

In 1998 Paola with the help of Dino Sbreglia created the A.I.S. SEGUIMI ONLUS to give greater coordination and visibility to the works developed around the communities of Seguimi.

In 2005 he published the book “In Rope” together with the journalist Vittoria Prisciandaro where he retraces the birth of the Group on the occasion of the 40th anniversary of its founding.

In August 2008,during the General Assembly he resigned as Chairman of the Group and became a “lifetime” adviser. In the same year the first symptoms of his disease begin

On 26 September 2009 she preceded us at the Father’s House and was buried in the cemetery of Montale Rangone (MO).

The “Spiritual Testament” by Paola Majocchi

I left you, still on pilgrimage
I have changed my dimension and I am in my truth
before God, in the surprise of infinity, of my sins.
Wish the God of Mercy forgive my inconsistencies
and everything I haven’t done in relation to the gifts I’ve received.
Today I see, while in mortality I have spent many moments of blindness.
I ask not only for God’s forgiveness, but also for yours.
The Lord by indecipherable means called me to
walk his way and I have sometimes taken paths
Different… the most comfortable, the easiest.
Looking at you from this new dimension I say to you:
Do not be carried by what is not love.
Take care of your person’s development, so that you may become
community brothers and sisters of the world.
Do every action in His company.
Always ask yourself how He would have done before any action.
Ask Wisdom insistently to see everything with His eyes.
Pray!
Understand, console, forgive, support.
Bring God’s smile indiscriminately to all and
He will smile at you at the moment of encounter.
Use the time of your life to build your eternity.
Don’t waste it.
Be transparent.
You live with one purpose, to bring the world to the Father.
Don’t make anyone suffer.
Enjoy the creation that is the throne of God.
Be firm in principles and condescending in all that is relative.
Don’t squander the opportunities for suffering… It is God who is educating you.
Make communion with one another to be stronger in communion with Him.
Change your mindset: convert corners again
dark of your heart, places not yet resurrected.
You live with optimism and look in every person and in
every situation on the bright side… fairies culture of life.
Remember the presence of Jesus in the Chapel… is the first guest of the house.
Keep your “commitments” keeping them jealously, do not cause difficulties.
Be poor above all in spirit; generously given.
Be poor, but not avaried. Give for free.
Look for the real maturity.
Preserve your secularity by accepting the consequence it brings.
I entrust you to Jesus.
I entrust the whole Group to Jesus because it is more His work than ours… But He uses you: listen to Him
personally and communally so that His Church does not miss what he has counted on
and for which you are responsible.
I have nothing to leave you but the guarantee of a more purified love.
From here I will follow you with a maternal gaze.
Do not forget me that I still need your affection translated into prayer.
Good bye!