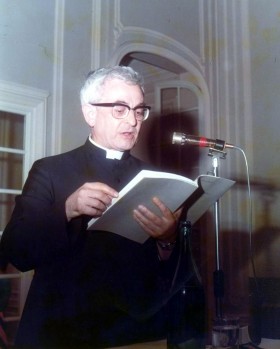 When Father Anastasio Gutierrez, at the invitation of many, decided to write a book on the Lay Group Follow Me – his creature – that collected the quintessence of this atypical association of lay people, he willingly accepted the proposal to name it thus: “Christians no discount.”

He was a person with a strong and penetrating intelligence, who went to the essence of things and disliked useless and fruitless chatter. Born in Spain, as a child he moved with his family to Argentina, but he felt like a Roman priest, having arrived in Rome as a young man and in the city at the heart of Christianity he spent most of his life until his death. He was a Claretian cleric, the Congregation founded by a great bishop and missionary, St. Antonio Maria Claret. For his intellectual gifts, his superiors decided to perfect him in law studies at the school of the great canonists of Lateran University. He was a lecturer in the Faculty of Canon Law for more than thirty years at the University, of which he also held the office of dean. He was a well-known canonist, especially for his consecrated life, and a highly sought after adviser. In this capacity he met Miss Paola Majocchi, sent to him by Mons. Mario Pio Gaspari, who worked in the Secretariat of State and was brother of Irma Gaspari, one of the initiars with Paola of the Follow Me Group. “Go to him,” he said, “you will be fine.” Paola, Irma and other friends had the intention of living consecrated life but in an innovative form: to remain in the world, like all lay people, and to make the Gospel fully assumed the norm of life, witnessing it in the midst of the people. But they didn’t know how to move. It was thus that one day Paola visited Father Gutierréz in his Roman home, in Via Giacomo Medici, confident of receiving some useful advice. He politely welcomed her, according to her style, listened to her for a long time and suggested that she attempt some contact with institutions that set similar goals. This was not followed, and so one day, in one of the frequent talks, the Father said to her, “Try your own path, I will help you.” From that day on, the competent counselor became the founding father. A man of essentials and clarity, as an expert canonist he has opened a new path and has transposed in the structure of the Group the fruits of forty years of study and experience. He wanted humbly and unpretentious Follow Me to represent a return to the essentials. There are two pillars: Jesus Christ alive and the human person to lead to full human-Christian realization through service to the world. In those days an important document of the Council had not yet been promulgated, the pastoral Constitution Gaudium est spes on the Church in the contemporary world, where it reads: “Who follows Christ, perfect man, becomes fully man”, but Father Anastasio Gutierrez felt that the time was ripe to attempt new ways in the following of Christ, encouraged by the words of the Gospel: “New wine in new otri” (Lc. 5, 8).

Card. Agostino Vallini
Vicar of the Pope for the Diocese of Rome
Member of Follow Me